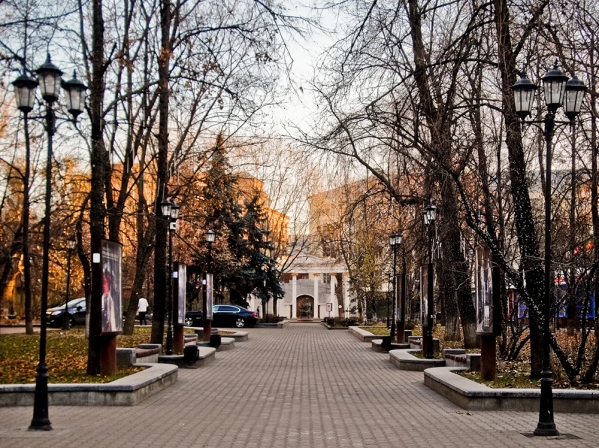 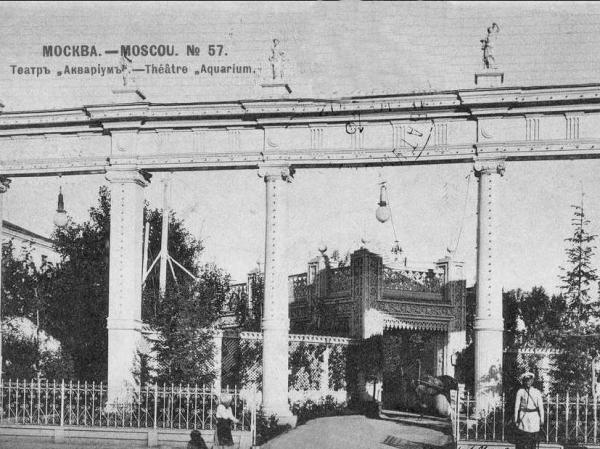 From 1911, the Nikitin brothers’ circus was based in the Garden, which was mentioned in the short novel Heart of a Dog – it was here that Dr. Bormenthal took Sharik. In 1926-1936 the Moscow Music Hall was located in the Garden (the building has not survived and the Theatre of Satire stands in its place). The Aquarium Garden and Music Hall probably provided inspiration for the Summer Garden and Variety Theatre in The Master and Margarita. It was there that Woland put on the famous black magic show. Bulgakov saw the Aquarium Garden every day through the kitchen window of the communal flat in house 10 on Bolshaya Sadovaya.
In the 1890s, the first Moscow electrical exhibition opened on the site of the future garden and shortly after, the owner of the garden, S. Malkiel, rented it out to entrepreneurs (M. Lentovsky, F. Tomas and others), one of whom was Charles Aumont, and in 1898, the garden was named the ‘Aquarium Garden’. Entertaining and cultural events were often held here and visitors could go up in a hot-air balloon, visit a photographer’s studio, an ice rink, a shooting range, a bowling alley and also the opera and theatre. The Garden is mentioned numerous times in Bulgakov’s works. In The Fatal Eggs, ‘In the Aquarium Garden, ablaze with neon advertisements and shining, half-naked women, the writer Lenivtsev’s revue Sons of Chickens was being played to great applause amongst the greenery of the open-air stage.’ In The Master and Margarita, Ivan Varenukha encountered Woland’s retinue in the lavatories in the Garden. The Garden is even mentioned in some of Bulgakov’s journalism (Chanson d’été and Travels in Crimea).
According to the memoirs of V. Kataev (My Diamond Crown), one night, both writers went to a casino near the Aquarium Garden. «Luck was with blue eyes that night», that is with Bulgakov. (Although, T. Lappa, the writer’s first wife, rejected this story).
Read also: