The model for the Kalabukhovsky house (Heart of a Dog) 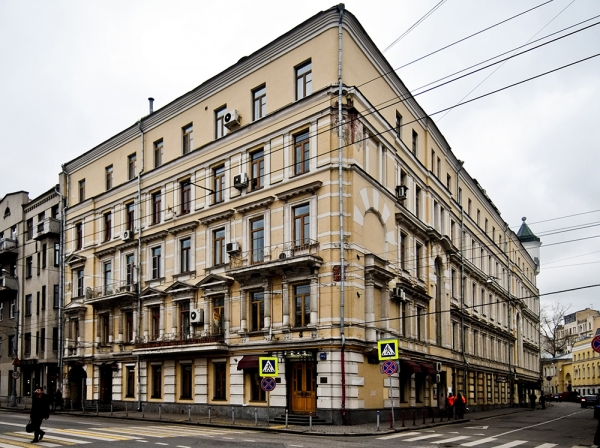 Bulgakov’s uncle lived here on the bel étage (at those times, the street was known as Kropotkinskaya Street). He was the doctor Nikolay Pokrovsky, who served as the main inspiration for Professor Filipp Preobrazhensky. With him, lived his brother Mikahil Mikhailovich, who was also a doctor. When describing Preobrazhensky’s house, Bulgakov was probably remembering his visits to his uncle on Prechistenka.
In Heart of a Dog, as in many other works by the writer, Bulgakov mixed fiction and real life from 1920s Moscow. For example, the story mentions Rykovka and Novoblagoslovennaya vodka, Aida, which was being shown in the Bolshoy Theatre at the time, the Yussems brothers circus show, and much more. Aside from this, Bulgakov very accurately described N. Pokrovsky in the story, right down to external similarities. Just like N. Pokrovsky, Professor Preobrazhensky lived on the corner of Prechistenka and Obukhov Lane, received patients at his home and wore bushy whiskers and a pince-nez. Just like Pokrovsky, Preobrazhensky is faced with having people moved into his home. In the story, the professor famously manages to escape Shvonder and the house committee’s attempts successfully, but Bulgakov’s model was much less fortunate: ‘They’ve moved people into uncle Kolya’s flat despite his protective letters. Uncle Misha has been forced out into a hotel and they’ve moved a couple into his room who have fixed in two lamps, one with one hundred candles, the other with fifty. And they never put them out, neither during the day nor at night’ (from a letter from Bulgakov to his sister Nadezhda on 24th March 1922).
Read also: