The address of Ivan Vasilevich from A Dead Man’s Memoir 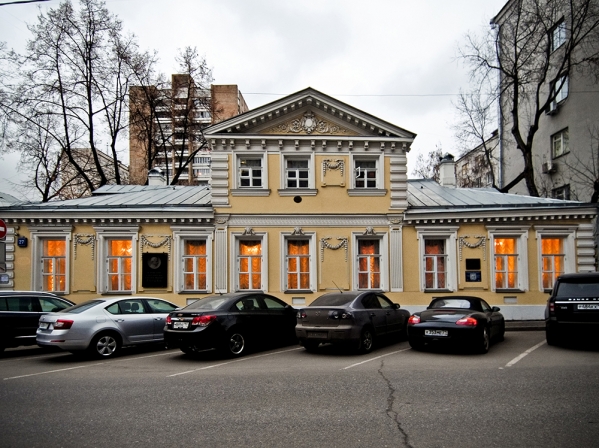 Mikhail Bulgakov settled the character of the director Ivan Vasilevich (generally recognised to be based on K.S. Stanislavsky) from Theatrical Novel in this house. It is here that the playwright, Sergey Maksudov, reads him the play, Black Snow.
The relationship between Maksudov and Ivan Vasilevich in the novel is complicated, just as it was between Bulgakov and Stanislavsky. The playwright and director recognised each other’s talents, however artistic differences often arose between them. Stanislavsky noted Bulgakov’s gifts for literature, directing and even acting, and was pleased by his arrival at the Moscow Art Theatre. However in the early 1930s, a line was drawn under this by the events surrounding the staging of the play, The Cabal of Hypocrites. The play was rehearsed for almost five years in an irregular manner – the rehearsals dragged on, then stopped and then suddenly resumed. In a letter to P. Popov of 14th March 1935, Bulgakov wrote, ‘Now Stanislavsky has given the orders… In front of the actors, he began to tell me how Molière was a genius and how the genius needs to be reflected in the play. Like vultures, the actors perked up and started asking for bigger roles. I was overcome with rage’. The play was staged at the Moscow Art Theatre in February 1936, but was soon taken off the stage as part of the anti-formalism campaign. In September, the offended playwright left the Moscow Art Theatre. Relationships were renewed following the death of Stanislavsky in 1938 – it was proposed that Bulgakov write a play about Stalin. With a difference of a year and a half, the director and the writer were buried opposite each other at the Novodevichy Cemetery.
Read also: