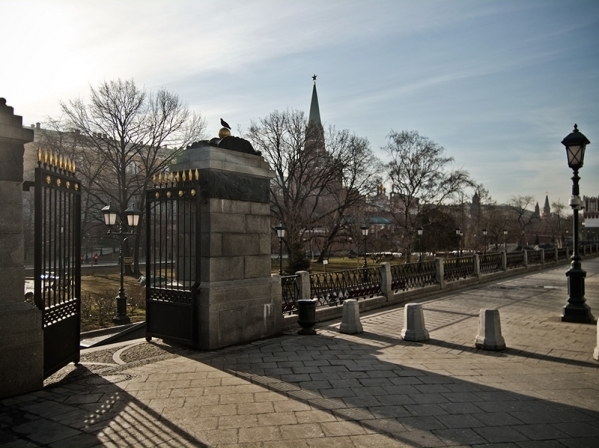 The garden was built around the Kremlin after the 1812 Fire of Moscow on the orders of Emperor Alexander I. The original name of the garden was the Kremlevsky Garden – the name was changed to the Alexandrovsky Garden in 1856. In The Master and Margarita, the meeting between Margarita and Azazello at which he invites the heroine to meet, ‘a completely safe foreigner’ takes place in the Alexansrovsky Garden. This is where Margarita receives the magical lotion as a gift.
The Alexandrovsky Garden and its surroundings also appear in Bulgakov’s essays. In May 1923, he witnessed a demonstration against the British Lord Curzon: ‘On Okhotny Ryad, endless rows of people walked along spanning the breadth of the street. I saw how Teatralnaya Square was completely flooded with people…’ (Benefit Performance for Lord Curzon), and in January 1924, he described the thousands of workers who gave to pay their respects to Vladimir Lenin. In the essay, Forty Forties, a commercial Moscow was presented: ‘On Okhotny Ryad the signs are so large that they overbear the little shops’. Korobochka, the heroine of Bulgakov’s satirical piece, The Adventures of Chichikov, planned to open a bakery in the Moscow Manège: ‘In vain they tried to convince her that the Manège is a public building and that it can’t be bought and that you can’t open anything inside it. The stupid wench didn’t understand a thing.’ The meeting between Margarita and Azazello in Alexandrovsky Garden is the last scene that the dying Bulgakov managed to adjust. Elena Bulgakova remembered: ‘In 1940, he made some more additions to the first part. However, when we moved onto the second part, I began to read about Berlioz’s funeral. He was about to begin making corrections when he suddenly said, -“Ok, I think that’s enough”, and he didn’t ask me to read anymore.’ The editing of the novel ended on Margarita’s words, ‘So then those are litterateurs following the coffin?’
Read also: