The address of Zinaida and Vladimir Komorskiy 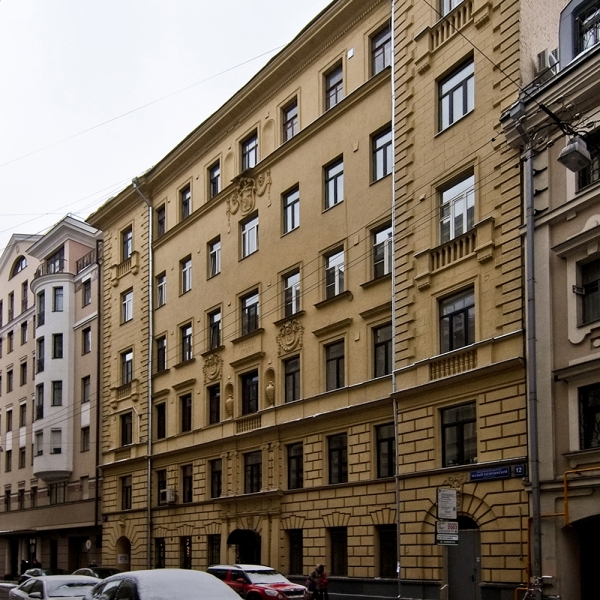 O. Volobueva’s former block of flats was built in 1914 by the architect V. Glazov. In this house lived the lawyer, Vladimir Komorsky, whom Bulgakov met in 1922, and, from then on, at whose house Bulgakov was glad to be a guest.
The writer’s first wife Tatyana Lappa explained how David Kiselgof (whom she would later marry) introduced them, as he enjoyed throwing literary gatherings. Komorsky himself remembered that they were introduced by Boris Zemsky (the brother of Andrey Zemsky, who found flat 50 for the Bulgakovs). Vladimir Komorsky remembered that the writer, ‘Usually came over alone carrying two bottles of dry wine.. We cooked kotlety for him; Bulgakov liked our food…’ However, Bulgakov delighted in the flat itself, which was captured by Bulgakov in his essay 1920s Moscow: ‘It is not a flat, but a sweetbox in three rooms. A bathtub, a little telephone… Manyushka cooks kotlety on the gas stove… I would marry, as God is holy, I would marry for that little telephone, for the screws of that gas stove, and no one would be able to drag me out of that flat’. At the Komorskys’ literary gatherings (Bulgakov called them ‘gatherings at Kozikh’), Boris Pilnyak, Andrey Sobol, Yury Slezkin, Yury Sobolev and others could be seen. Mikhail Afanasevich and Tatyana Nikolaevna celebrated the new year, 1923, in the Komorskys’ flat. On 30th May 1923, a party was thrown in the Komorskys’ flat in honour of Aleksey Tolstoy, who had returned from abroad. Bulgakov described him in Theatrical Novel in which Aleksey Tolstoy can be guessed at in the depiction of the famous writer, Izmail Bondarevsky.
Read also: