The address of Evdoksia Nikitina 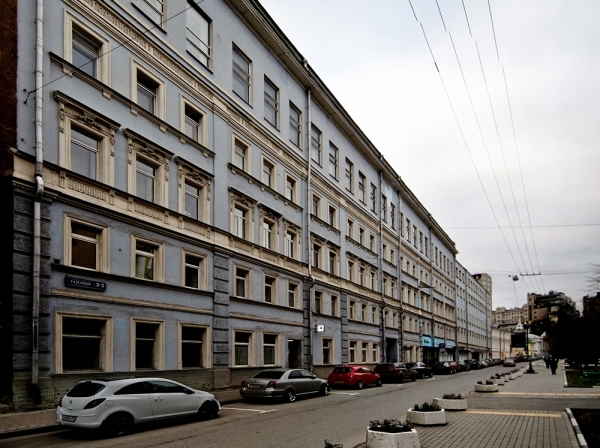 In the first half of the 1920s, Bulgakov went to meetings of the Nikitinskie Subbotniki literary circle, which took place in E. Nikitina’s house on Ogarev Street (nowadays Gazetny lane). In December 1922, Bulgakov read his short story Notes on the Cuffs here. In March 1925, one of those present in the flat, denounced Bulgakov to the OGPU for having read the anti-Soviet story, Heart of a Dog.
M. Bulgakov appeared at a literary meeting of the Nikitinskie Subbotniki for the first time on 30 December 1922, reading from his, Notes on the Cuffs. A short note is recorded in the minutes: ‘Mikhail Afanasevich pointed out in his preliminary remarks that his notes, consisting of three parts, depict the hungry life of a poet somewhere in the south. The writer arrived in Moscow with a specific intention to make himself a literary career. Mikhail Afanasevich read chapters from the third part.’ The reading of the first and second parts of the ‘Notes’ was continued on 14th January 1923. Almost four dozen listeners gathered at the meeting. Amongst the participants of the circle were future close friends and acquaintances of Bulgakov – V. Veresaev, I. Rozanov, K. Lipskerov and others. The next time Bulgakov came to the Nikitinskie Subbotniki was at the end of the year on 22nd December (at the meeting, A. Kurennoy drew a famous portrait of the writer in pencil), and then in April 1924. In 1925, he read Heart of a Dog at two readings on 7th and 21st of March, shocking the OGPU informer. In the second half of the 1920s, Bulgakov moved on to drama and last appeared at the anniversary meeting of the circle on 16th November 1929. His speech at the discussion of F. Raskolnikov’s play caused a scandal.
Read also: