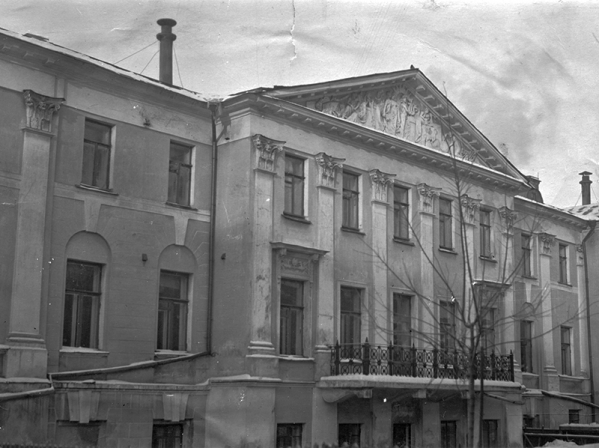 After the revolution, the main literary organisations of Moscow were located in the house in which A. I. Herzen was born – the All-Russian Union of Writers, the Russian Association of Proletarian Writers and others. This house is depicted in The Master and Margarita as the Griboyedov House in which the fictitious organisation MASSOLIT is based.
In Bulgakov’s era, the Union of Writers and other literary organisations played an enormous role in the lives of literary people, significantly regulating their publications and therefore their livelihoods, not to mention their access to the public. Exclusion from the Union was a form of dealing with unwanted authors and voluntary exit was a strong form of protest, which few dared to carry out. In 1929, a great campaign against Evgeny Zamyatin and Boris Pilnyak was lauched after the publishing of their novels We and The Red Tree abroad. Zamyatin was excluded from the Union of Writers, his plays were taken out of theatre repertoires and he was forbidden from publishing. His name, if mentioned at all, only appeared in negative contexts. As a protest against the witch-hunt against his friend, M. Bulgakov submitted his notice on leaving the Union of Writers on 2nd October 1929. On 8th October, A. Yakovlev told Zamyatin in a letter, ‘Veresaev recommended that I leave the administration under the pretext of illness. I don’t think this is a way out. If one is to leave, then it’s as a protest. The exits from the Union – yours, Akhmatova’s, Bulgakov’s – are a moral blow to everyone’.
Read also: